**This page is heavily outdated. Last updated on March 2013**

IVR Junction [@ Microsoft Research]
Project Website: http://www.ivrjunction.org
Advisor: Dr. Bill Thies
Publication: Aditya Vashistha and William Thies, "IVR Junction: Building Scalable and Distributed Voice Applications in the Developing World", in 6th USENIX/ACM Workshop on Networked Systems for Developing Regions (NSDR 2012), June 2012, Boston, US.
Interactive Voice Response (IVR) systems play an important role in collecting and disseminating information in developing regions. Recently, researchers have used IVR technology to build voice forums, in which callers leave messages that can be heard over the Internet and over the phone. However, despite their appeal, voice forums remain difficult to set up, and difficult to scale due to the overhead of moderating content and the cost of phone calls. 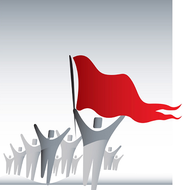 Usable IVR Systems [@ Microsoft Research]
Advisor: Dr. Bill Thies
We are adding two visual components in IVR systems to make them more usable. The first component enables IVR service providers to visualize call data on a mapping platform like Ushahidi, Google Maps etc. by using an open source API which can be interfaced with any IVR platform and any mapping platform. This helps them to have birds-eye-view of how people are interacting with their IVR application for disaster relief efforts, grievance redressal etc. Location data also enables IVR systems to provide location based information to IVR callers.

The second component aims to improve urban users’ IVR experience by visualizing IVR call tree on a smart phone as soon as they call an IVR application from a nearby second phone and put the phone on a speaker mode. We are embedding call tree data in the audio stream, which is then decoded and visualized by the smart phone application. The visualized call tree results in easy navigation of IVR applications’ tedious and arcane call trees. 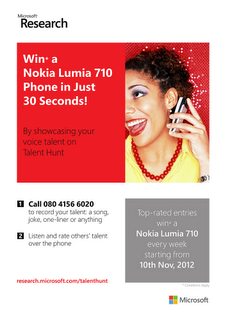 In recent years, IVR systems have spanned diverse domains, including citizennews journalism,agriculturaldiscussion forums, communitydialogue, user-generatedmaps, access tohealth information, outreachto sex workers, groupmessaging, feedback on school meals, supportfor community radio stations, ruralemployment exchange, and  viral entertainment platform. Despite the enthusiasm around them and evidence that proves that IVR applications are having the envisioned impact, the biggest challenge in scaling Interactive Voice Response (IVR) systems is to figure out how to scale moderation of content.
Community moderation has played pivotal role in success of web 2.0 sites like stackoverflow.com, quora.com, Yahoo! Answers etc. The research goal of Talent Hunt project is to design community moderation algorithms for IVR systems, evaluate usability of community moderation voice user interface for several communities in the developing world, and investigate efficacy of community moderation to scale IVR systems. We are also investigating that if the content is appealing, would people be willing to pay to use the system.
In order to that, we have designed an IVR application in entertainment domain,Talent Hunt, where callers can record a voice talent (song, poem, joke, one-liner etc.), listen and rate talents recorded by others, and share talents with their friends. So far our application is called 4900 times and the total time spent by callers is more than 12860 minutes.

Farmers face various problems which results in low productivity, lower profits and higher indebtedness which eventually lead some of them to commit suicide. There is a need to find solutions to eliminate or minimize interference of middlemen, to effectively disseminate knowledge among farmers, to bridge the gap between farmer, peer farmers, agriculture extension workers and experts, and to enable farmers financially. However, there are various challenges and constraints which an ICT system needs to address. Many farmers have low or no literacy level. They have limited financial resources and limited availability of electricity. Only device which most farmers use is a low cost 2G mobile phone but most of them do not compose or read text message.  As voice is a natural and accessible medium for farmers having limited literacy level, we use a voice based social network and information delivery system which: 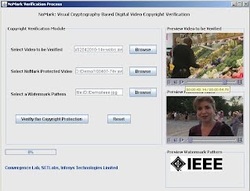 Patent: Aditya Vashistha, Rajarathnam Nallusamy and Sanjoy Paul, "Method and System for Efficient Watermarking of Digital Video” filed for Indian Patent (Application No: 3779/CHE/2010) and US patent (Application No: 13/027,675).
NoMark project is a POC system for a filed patent application which protects the digital video content against copyright infringement, piracy and illegal distribution without embedding any watermark information. In addition, copyright protection is extended on each scene of the NoMark protected video.
Usually, watermarking algorithms embed watermark data into an image or a video in an invisible or visible manner. These algorithms are prone to many known watermark attacks aimed at detecting and distorting the embedded data. As no data is embedded into the NoMark protected video, the video is not susceptible to many traditional watermarking attacks. NoMark method is robust, novel and imperceptible. The method is robust against a wide variety of image and video watermarking attacks.

Scene change detection is instantly performed by human but vast computational resources and complex algorithms are required to automate the process. An efficient 2 pass abrupt scene change detection algorithm is incubated that results in high precision and recall in optimal time. The efficiency of scene change detection is improved by a second level inspection of scene changes detected after first pass. Second level inspection is done using a fixed average and a varying average to ascertain whether the scene boundary detected is correct or the scenes need to be combined. False positives are removed to improve the precision values. The algorithm is fast as it is based on color histograms and results in average precision and recall values higher than 95%. 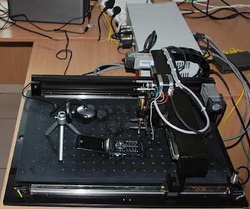 LongArm is a robotic system for remote testing of mobile and IPTV applications. In this system, the handset is in the cellular network service area but the tester is in a remote location.
The tester controls the handset over the Internet using LongArm. The system does not require any changes to be done to the mobile phone itself. In LongArm the input given by the human tester is replaced by a 3-axis robot which does the pressing of the keys. The output is captured by a camera. This robot-camera system is placed in the location where the phone network is available (say, US), and controlled from a remote location (say, India). This possibility gives opportunities to leverage the potential of the global outsourcing business model. In addition, the system is agnostic to the Operating System & application running on the mobile phone, and is also non-intrusive.

Language: J2ME Tool: NetBeans IDE
This project is a POC system for a filed patent application which enables the users to access the Software engineering tools like use case diagram, deployment diagram, activity diagram, class diagram, ER diagram on mobile. User can generate the equivalent java code from class diagram and can generate SQL queries for oracle database from ER diagram using forward engineering approach. User can also create the class diagram from a java code snippet using backward engineering. Also the diagrams can be converted into svg files for desktop supported format.